The spark behind Lightning Rock comes from Jordan Kubek and Tyler Knight, who have been making wine in Summerland  since 2011. Jordan has a certificate in winemaking from Washington State University and is fuelled by her passion – making great-tasting sparkling wine. Together with her husband Tyler they have spent their winemaking years travelling between Okanagan harvests in Summerland, and harvests in the southern hemisphere, learning and working for top wineries in Australia, Chile, New Zealand and South Africa.

Jordan’s father, Ron Kubek, lit the fuse of the winery as a way to help make the dream of producing fresh, juicy, light wines with respect to healthy fruit and vineyard expression to a reality.

When they came together to view and ultimately purchase the property, a large split rock was discovered. Local rumours suggest it was hit by lightning, and so a collective light bulb went off, and the name of the winery was obvious. A reflection of the land – whether or not the rumour is true – and its alledged history, now producing premium grapes for the winery’s style of fresh, zippy, lower alcohol wines that hit the palate like a bolt of lightning. As a team, Jordan, Tyler, and Ron let the energy fly while doing everything possible to ensure quality from vine to bottle to the table while embracing the land, growing in harmony with nature, and enjoying being a part of the global winemaking community.

Her experience as the sparkling winemaker at Okanagan Crush Pad for seven years, coupled with developing her skills at Seresin Estate in New Zealand to learn biodynamic practices, plus spending time at Xanadu Wines in Australia’s Margaret River with top winemaker Glen Goodall, inspired Jordan to weather the storm of making her own wines.  She began at Lightning Rock in 2017 after spending some time travelling to the small town of Calquenes in Chile with Tyler to work with Francois Messoc, the best winemaker in that country. The energy of Lighting Rock was ignited in its garage in 2018, where the first crush took place.

A background an education in biology and etymology from UBC Okanagan gives Tyler a scientific view of winemaking, though he started on a casual basis in 2012. He met Jordan that year and not only found his partner but a passion for the vineyard and the art – and science – of getting grapes to the glass. Working in South Australia and New Zealand, he also spent time in Stellenbosch, South Africa, at a small winery called Edgebastien. Then he and Jordan spent 49 days travelling through France, Italy, Germany, and Austria, before landing in Summerland to manage vineyards, where great wine begins.

Ron Kubek Coming out of early retirement after a successful career in real estate on Vancouver Island, the choice to work with his daughter and son-in-law in the wine business was an easy one. First acquiring the Elysia Vineyard and getting to work on pruning and preparing for holistic and organic farming, Ron’s skills came into play as a home and farmworker housing were renovated. Next was revitalizing the St. Katharina vineyard, planted in 1968 but dormant for six years, then followed the purchase of Canyon View Vineyard, doubling production in 2018. In 2019, new designs for the winery building began, and the building was constructed, igniting the growth of this family business 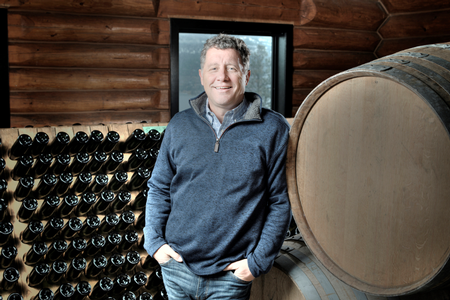